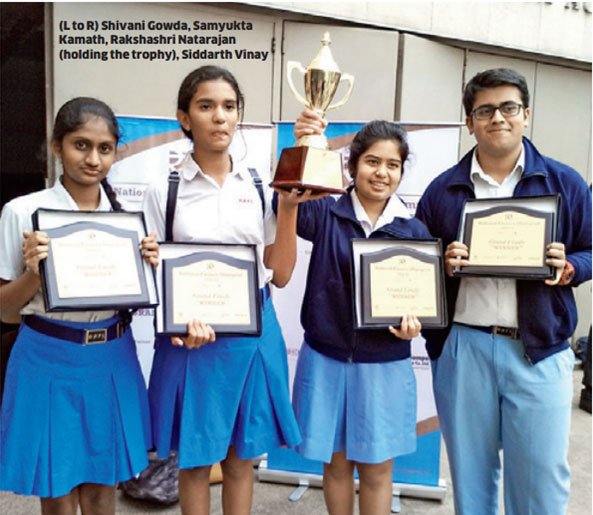 Four of our dazzling NAFLers, Rakshashri, Siddarth Vinay, Shivani and Sanyukta, stole the show in Delhi on February 2nd, 2017 at the International Finance Olympiad which is an annual event conducted by Indian Institute of Financial Markets along with The Economic Times. It was conducted in three levels, one at the school, regional and national level. At the national level there were six participating teams from India and Middle East. Each and every question was challenging and there was stiff competition, but our “NAFL Finance Wizards” left the audience in awe.

The grind the students went through while preparing for the event helped them bag the first place, winning a cash prize of Rs 1,00,000/- for the second time in a row. 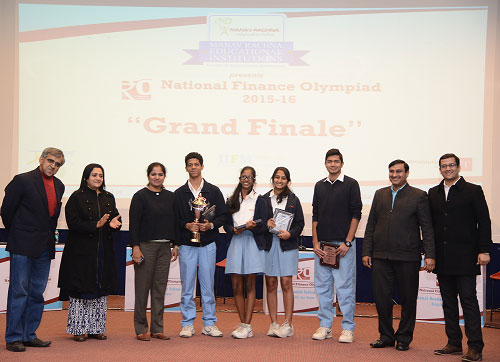 The National Finance Olympiad (NFO) is a yearly event organised by the International Institute of Financial Markets (IIFM) and sponsored by The Economic Times. A national level financial quiz competition, the aim of the NFO, is to encourage young students to learn more about the financial world and make them familiar with the need and the art of managing money.

This year students from NAFL participated in the NFO 2015-2016 and four students, Shruthi Raghunandan (Grade 8), Sai Premnath (Grade 9), Aishwarya Ramanath (Grade 11) and Sunny Roshan (Grade 11) were shortlisted from Level 1 and Level 2 to participate in the Grand Finale National Round held at Delhi. The other schools which qualified for the National Round were Mount Abu Public School, Delhi, St. Kabir Public School, Chandigarh, Jamnabai Narsee School, Mumbai, Wynberg Allen School, Mussoorie, and DPS, Kuwait.

At the Grand Finals held at Delhi, the day began with an official lamp lighting ceremony by the chief guests Mr Ompal Singh and Dr Alok Puranik. The six finalist schools competed in the first couple of rounds such as Fantastic Four and Book Keeping: The questions in these rounds were well crafted and the six teams fought hard to make it to the final three. NAFL made it to the final round amidst stiff competition. The intensity of the final round was quite high as the three teams were all highly competitive. All four students of NAFL performed really well with no weak link and, in a nail biting finish, clinched the title. The students were awarded a trophy and the first place cash prize of Rs 1,00,000. They were appreciated by one and all present at the competition. They have made everyone proud and this is indeed another feather in NAFL’s cap!

Cambridge English Language Assessment and the Australian Trade Commission ran a video competition where students had to demonstrate their English skills and creativity to create a 3-minute video.

FIRST LEGO League (FLL) India is a robotic program for 9 to 16 year olds, which is designed to get children excited about science and technology.

A team of 6 NAFL children, named 'Dhanya', (an acronym of all team members' names) won the regional round in FLL of building a robotic project and were among 36 finalists who competed in the National round in Delhi on 5th and 6th - their placement is still to be announced. Congratulations to Shreyas S. Iyer, Suthanth S. Kashyapa, Dhiya Virendra, Arundhati D'Cruz, Shravya S. Iyer, Amulya Doss.

Karan Agrawal, Head boy, grade XII, had the great opportunity of attended a three-week long programme on Robotics by the University of Pennsylvania, a college-level course. The only Indian candidate selected, Karan had 34 other participants from the US, China, UK and Korea to learn and work with. An amalgamation of mechanics, electronics and programming, the final task of this intensive workshop was to build a robotic military tank. Karan says he thoroughly enjoyed the accelerated learning (classes were from 10 am to 10 pm!), the challenges and the team work that made this academic experience so valuable and memorable! He scored a 4/4 GPA for the course….Well done, indeed, Karan, and congratulations!

Khush Shah, grade IX, was selected to be part of Lourde Vijay’s dream dance troupe from Bangalore to compete in an international dance world cup competition at Portugal in July’ 14. He participated in two junior group events: the street dance and hip-hop categories, winning 2nd place internationally in both events! Congratulations, Khush – may you keep furthering this awesome talent!